Traffic violations are not only common but often go unchecked in our country due to lack of manpower, resources and adequate technology. However, with the introduction of the New Motor Vehicles Act of 2019, the Government of India has focused on the integration of new technology, stricter enforcement and higher penalties, to ensure improved road safety.

As part of its initiative to integrate technology for increased road safety and to curtail corruption, the government has also adopted various Intelligence Traffic Management Systems (ITMS) for traffic monitoring, surveillance, enforcement and penalisation.

Some of the states that have implemented an e challan payment system include Delhi, Maharashtra, Haryana, Punjab, Gujarat, Himachal Pradesh, Jammu & Kashmir, Tamil Nadu and Rajasthan among others. Also in Uttar Pradesh, traffic violators can check e challan status and make traffic challan enquiry at the E challan UP website.

The Government of India has introduced this facility to make traffic-related services convenient for the citizens and effective to monitor for the authorities. The traffic e challan is sent via an android application and web gateway. The application is associated with the web portal implemented by the government, which is Vahan and Sarathi. These two portals make several traffic challan-related facilities easy to access. You can make online challan payment and check your challan status online.

In this section, we will be discussing in detail regarding what e challan is and how to make e challan payments when charged with one.

What is a Traffic E Challan?

In India, when a vehicle owner violates traffic rules, he/she is handed over a ticket called a manual traffic police challan that mentions the violation and the penalty for disobeying traffic rules and regulations. However, issuing physical traffic challans is not only cumbersome, but there are high chances that the violator may go scot-free by paying a fraction of the original amount. Also, with a physical traffic challan, the payment process is time-consuming as the vehicle owner has to go to the nearest RTO office to make the e challan payment.

To solve this problem, the Ministry of Road Transport and Highways (MoRTH) introduced traffic e challan, which is simply a traffic challan in electronic form. This integrated information technology-based enforcement platform can be used by traffic personnel to issue traffic e challans in real-time and levy fines according to the rules set forth by the New MV Act of 2019.

This new technology driven RTO challan system ensures that there is transparency in the way fines are collected from road users. E challans also make sure that the e challan payment is credited directly to the concerned RTO’s account.

How Does an E Challan Work?

The objective of e-challan is to keep traffic violations in check and curb road menaces such as over-speeding, drunk driving, red light violation, riding without a helmet, driving without a seat belt, etc.

Electronic traffic police challan or e-challan can be issued or triggered in two ways:

While some cities in India have automated systems for issuing e-challans, others are done manually by traffic enforcement personnel through an android-based mobile app and back-end web applications, which are connected to the RTO database.

Once an e challan is issued in a vehicle owner’s name, he can go to the designated website of the concerned RTO and check his e challan status. To avoid legal action and stiff penalties, the vehicle owner can make e challan payment without visiting the local RTO office; he can make the payment online using debit cards, credit cards or net banking.

Traffic e challan is not only helping curb safety violations in India but has been instrumental in enhancing the coffers of regional transport offices. In 2019, E challans in UP helped the state government collect Rs. 201.91 crore in fines while Gujarat was second among top five e challan payment collecting states in India with fines worth 101.28 crores. 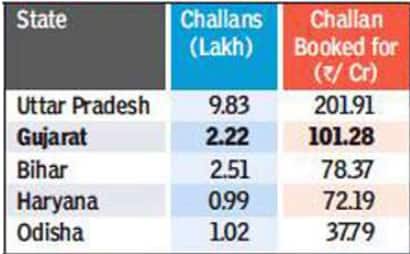 If you have jumped the red light, parked your vehicle in an unauthorized place and have crossed maximum speed limits or committed other traffic violations, you will receive an e-challan on your registered mobile phone or residential address. Once you are issued a challan, you have 60 days to make the traffic police fine payment online. It is wise to make the payment as soon as possible as you may forget making the e challan payment on time and face legal action.

Here are the steps for traffic e challan payment online:

If you have accidentally deleted the RTO challan SMS or misplaced the e-challan sent to you, you can still carry out a traffic challan enquiry and check your e challan status online by following a few easy steps.

Here are the steps to check your traffic e challan status online:

E-challans are an effective, foolproof and efficient traffic enforcement system to detect, curb and penalise traffic violations. Don’t make the mistake of taking it for granted and be careless in paying the e-challan fines. You cannot escape this law, but you can invite stiff fines, cancellation of driving licence or legal action against you.

It’s important to understand that these rules are made so that our roads are safe and convenient to use. Contribute to road safety and nation-building by driving safely, maintaining road discipline and etiquette, and following traffic rules and regulations. To understand the importance of abiding by the traffic safety rules, take a quick look at the road accident and death rates in India.

Indian roads are termed one of the most dangerous in the world, and road accidents and deaths have been increasing every year. In 2002, Indian roads witnessed around 75,000 deaths in a year; by 2018, it had doubled to 1.5 lakh per year.

With this data, it is quite clear why following the traffic rules and safety is vital. Failing to do so cannot only put yours and other people’s lives in danger but can attract hefty penalties and imprisonment (in extreme cases). Let us take a look at traffic safety rules implemented in India.

Traffic Rules and Regulations in India

If you want to avoid traffic challan payment in India, it is imperative to be aware of the latest traffic rules. Here’s a list of traffic rules one must follow when driving/riding on Indian roads –

Following and getting yourself acquainted with the rules associated with traffic challan is crucial. While that may be one in a litany of points you have to keep in mind with regard to road safety, the pointer at the top of your list should be the securing motor insurance.

Having adequate car insurance or bike insurance is mandatory to drive on Indian roads. You can avail of a comprehensive motor insurance policy on Finserv MARKETS and reap in benefits such as cashless claim settlements, add-on covers, hassle-free renewals, and so much more.

Not paid e-challan ? Your car may be seized

Starting December 1, your vehicle could get impounded if you're in Thane and haven't made your pending e-challan payments.

The Thane police reportedly issues 25,000 e-challans everyday, and half of them remain pending. This has happened despite the department’s efforts of providing multiple payment options such as through Maharashtra traffic website, the app, Paytm, apart from the 18 police traffic stations armed with 300 constables possessing machines.

Balasaheb Patil, DCP, Thane Traffic Police, said that offenders will first be given a 10-day notice period. If they don’t pay up within this period, their vehicles might be seized as per the Motor Vehicles Act.

Pending e-challan? Cops to now pay a visit to recover due payments

As per the Mumbai traffic police, there are 29 lakh unpaid challans as of December 2020. It is of no surprise that the department has a backlog of close to Rs.317 Crores. To clear the same, the department has come up with 11 teams consisting of 2 police officers each.

These teams will conduct door-to-door visits and recover payments for due challans. Motorists will be informed beforehand via a phone call and in case they don’t have funds, they will be asked to pay up the same at the earliest.

This move follows the incident where the e-challan system failed to produce expected results. Besides, the department believes that motorists would be more agreeable at their homes than on the streets.

With the failure of the e-challan method, the Mumbai police has now taken measures for alternate means of collecting fines such as cash payments. Though the e-challan option is still available, cash or card payment for your traffic challan is now possible, be it on the spot or at a police station.

For the past four years, cash payment for challans was not allowed. Now, although permitted, the move has come with a condition that you are to pay your traffic challan dues only to an officer of sub-inspector or higher rank. The first department to adopt the e-challan system has now gone back to cash methods in a bid to improve the system.