Eway bill is a unique bill number used for the specific consignment that involves the movement of goods from one place to another. The Eway Bill is required for the commencement of movement of goods. The E-Way Bill system now has a new feature added on the eway bill portal. As per the rule, if the GST registered taxpayer has not filed their Return 3B for the last two successive months/quarters, then that GSTIN gets blocked for further generation of eway bills either as Consignor, Consignee or Transporter. If a taxpayer fails to file the GSTR-3B for two or more consecutive months, then he/she will no longer be able to generate e way bills to do dispatches and receive goods. Only after the GSTR-3B returns are filed, the e-way statements will get unblocked on the next day.

How does the e-way bill get blocked?

As per the rule, when a taxpayer has not filed the GSTR-3B for two or more consecutive months on the GST portal, the same will be reflected on the eway bill system and block the GSTIN. The GSTIN of blocked taxpayers cannot be used for e-way bill generation either as Consignor or Consignee. It means the taxpayer will not be able to receive goods if the GSTIN is blocked. You can check the block/unblock status of your GSTIN on the Eway Bill website

When the e way bill gets blocked, the taxpayers can come across the following two situations:

1. A pop-up notification will appear every single time the block taxpayer tries to generate a new eway bill for a bulk generation.

2. If any taxpayer/transporter enters the blocked GSTIN as another party while e-waybill generation, the similar message will appear.

How to unblock the e-way bill?

Once the GSTR-3B is filed for the defaulting period, the taxpayer’s GSTIN will get unblocked automatically. A taxpayer can also generate the eway bill soon after filing his returns by following the steps below :

Step 2: Enter the GSTIN, CAPTCHA Code and click on ‘Go’.

Step 4: In case this doesn’t work, a taxpayer can reach out to the GST Help Desk and get the query resolved.

Earlier the Jurisdictional Officer had access to unblock GSTIN online based on the manual representation from the taxpayer. Another way for eway bill unblocking was through online application in EWB-05, providing a sufficient cause for non-filing of GSTR-3B.  As of now, both facilities of online application are not active. 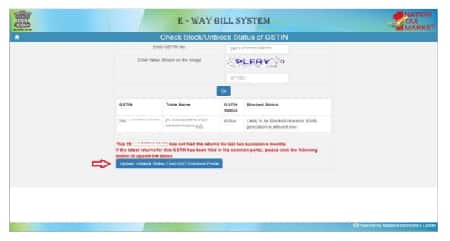 Impact on The New System On The Taxpayer

The biggest concern for a taxpayer with the blocking system is that he/she cannot deliver/receive goods without an eway bill. The authorities will levy a fine if the goods are transported without an eway invoice, equivalent to the tax amount payable. These goods will be seized or detained and may be released only on payment of the tax amount along with a penalty. The business operations will come to a halt if the delivery of goods is not made on time. To avoid getting blocked, the taxpayer has to file the returns on time, leading to an overall improvement in the GST revenue, and the entire system will automatically become more compliant.

There are two types of transporters GST. They are:

As per the rule, the eway bills that were previously generated and valid can be updated with the help of vehicle and transporter details by the authorised taxpayer/transporter. If the taxpayer wants to do an eway bill generation immediately after filing the returns, then he can do it through the GST Portal

Step 2: Enter the GSTIN and check the status.

Step 3: If it is displayed as blocked, then he/she can select the update option to get the latest filing status from the GST Common Portal and get eway bill unblock.

In case, the system is not yet unblocked the GSTIN to generate e-way bills; then the taxpayer can contact the customer support and raise a complaint to resolve his/her case. An E-way bill is mandatory for businesses that deal in the movement of goods from one place to another. Hence business owners must know the importance of generating an eway bill for smooth operations. The same way at Finserv MARKETS, we understand businesses and their requirements. With a business loan, you can get the financial assistance wherein you don’t have to pledge any security and can avail up to Rs. 30 Lakhs with minimal documentation, and quick approval. Hurry! Download the Finserv MARKETS App to apply for a business loan.