How to Modify, Reject and Cancel E-Way Bill?

There is also a provision of generating or cancelling the e-way bill via SMS, or through the Android App. Every generated eway bill has a 12-digit unique E-Way Bill Number (EBN). This is provided to all three parties- supplier, receiver and transporter. The bill may be cancelled for several reasons such as errors in the movement, changes in goods, and more. Read on to know more about e-way bill cancellation.

Note that no other details of e-way bills can be modified. Also, a bulk update of the vehicle number option is made available on the portal where an excel template has to be filled and uploaded on the e-way bill portal for updation of vehicle details for multiple e-way bills at a single shot.

Here is a Step-By-Step Process to Update Vehicle Number:

Login to the E-Way bill portal and select the ‘Update Vehicle No’ sub-option under the ‘e-Waybill’ option that appears on the left-hand side of the dashboard. 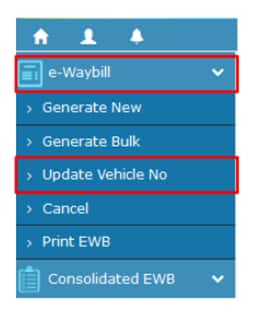 Note: If the consolidated e-way bill needs an update of transport /vehicle details, select ‘Re-generate’ under ‘Consolidated EWB’ appearing on the left-hand side of the dashboard. 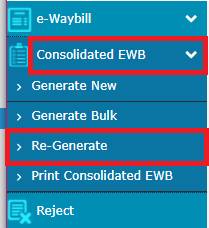 You will be able to see the complete list based on your choice. Select the relevant e-way bill that you want to update the vehicle number.

Enter the following details on this page:

Note: Instead of the vehicle number, enter transporter document number if the mode of transportation is rail, air, or ship. 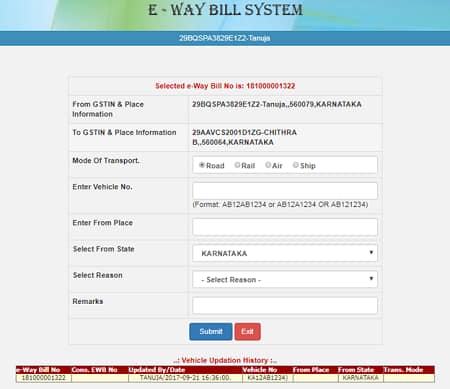 The e-way bill can be updated with new details instantly. Even consolidated e-way bills can be modified for the vehicle details.

The original transporter/ seller who generated the e-way bill can change/ re-assign the Transporter ID by merely replacing the existing transporter with a new transporter. Once the initially assigned transporter assigns another transporter, the seller cannot make such e way bill modification.

Here is a step-by-step process for re-assignment of another transporter:

Select ‘Update EWB Transporter’ sub-option under ‘e-Waybill’ option appearing on the left-hand side panel of the dashboard. Enter the e-way bill number and click on ‘Go’.

Next, enter the Transporter ID and select ‘Submit’.

The updated e-way bill will appear on the screen. Select the ‘Print’ option to print the e way bill.

Note that the e-way bill number remains the same even after the modifications in the transporter details.

How to Reject E-Way Bill?

A taxpayer has access to reject the e-way bills generated by other parties on the former’s GSTIN.

For example, if the consignment did not reach the assigned destination due to its cancellation on the way; the recipient can reject the e-way bill for the same.

After you login, check for the ‘Reject’ section on the dashboard and click on it. 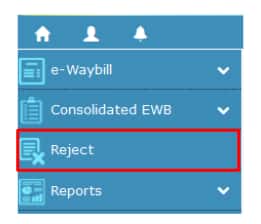 Once you click on ‘Reject’, the following screen appears :

Click on ‘Submit’ after setting the date on which the bill was generated. After entering the date, you get the list of bills that were generated on the date.

Tick mark against the concerned e-way bill that you want to reject on the right-hand side. Now you will receive a message on the screen on the rejection of the e-way bill.

Click on ‘e-way bill’ / ‘Consolidated EWB’. A drop down appears, select ‘Cancel’ from the same. 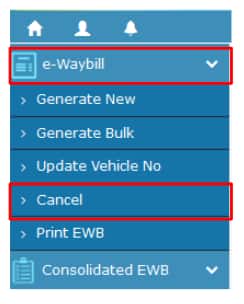 Input the eway number of the bill that needs to be cancelled and click on ‘Go.

Provide a practical reason for the cancellation of the bill. For example, the goods are not being moved, an incorrect entry in the E-way bill entered, etc.

The e-way bill is of two parts, i.e Part-A and Part-B.

At present, there is no provision made that allows the modification of Part-A of the eway bill in case incorrect data is entered. One has to cancel the bill and re-generate a new one.

A consignor who has furnished information in Part A, can assign the e-way bill number to another registered or enrolled transporter who can then update information in Part-B of Form GST EWB-01. This facilitates the further movement of goods.

How To Extend The Validity Period of E-Way Bills?

The generator of the e-way bills can extend the validity period of e-way bills either four hours before or after the expiry of the bill.

Here is how to do the same:

Login and select the ‘Extend validity’ under ‘e-Waybill’ option displayed on the dashboard. 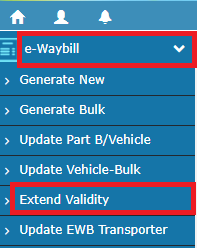 The e-way bill form appears, now select ‘Yes’ against the question ‘Do you wish to get an extension for this EWB?’ at the bottom of the screen. 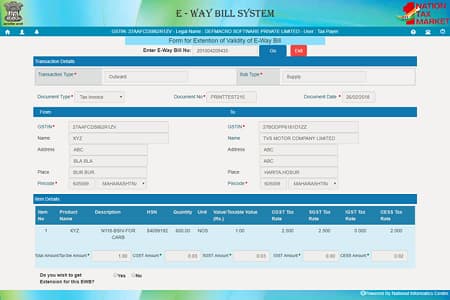 You may re-enter the total distance, place of dispatch and location of delivery of the goods that were being transported. Once the validity is extended, the new e-way bill number gets allotted in place of the old one.

An e-way bill is mandatory for businesses that deal in the movement of goods from one place to another. Hence business owners must know the importance of generating an eway bill for smooth operations.